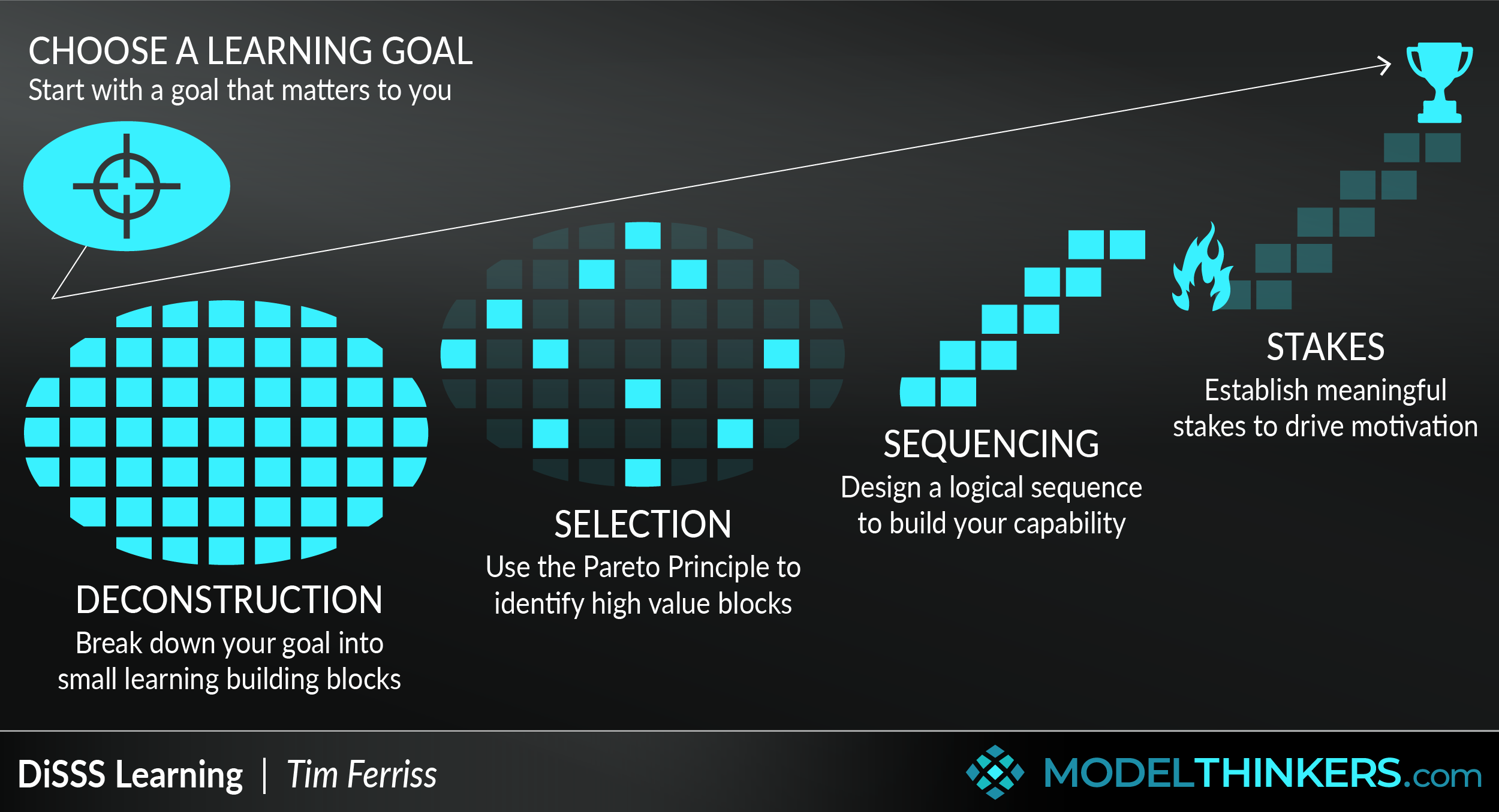 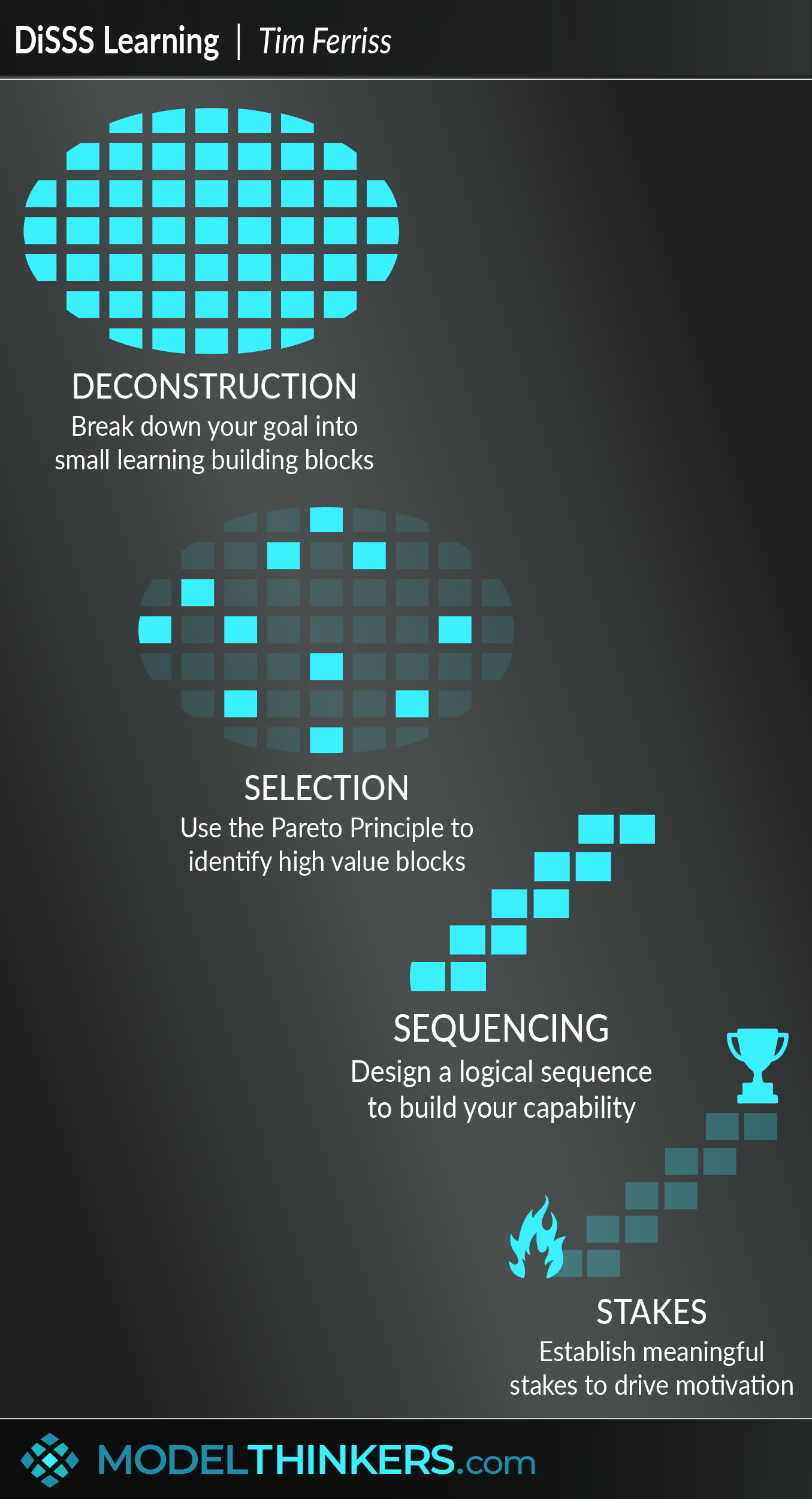 Tim Ferriss has an impressive list of accomplishments under his belt. Beyond his best selling books including The 4-Hour Workweek, and his record-breaking podcast, Ferriss sees himself as a ‘human guinea pig’ and consistently researches and tests strategies for greater performance, productivity and happiness. That’s why, when Ferriss promotes a learning technique, it’s worth exploring further.

DiSSS Learning is Ferriss’ framework for accelerated learning and consists of the Deconstruction of a challenge into small, learnable units; Selection of the 20% of units that will deliver 80% of the results; Sequence the blocks for sustainable and effective progress; and establishing Stakes to create real consequences and sustained motivation.

Ferriss notes that when it comes to learning, “material beats method,” in other words, Ferriss argues that the choice of what you learn is more critical than how you learn. With that in mind, Selection involves applying the Pareto Principle to identify the strategic building blocks, or areas of learning, that will deliver you the bulk of your results.

For example, while English technically has hundreds of thousands of words, around 50% of written material is thought to consist of the same couple of hundred words. In this context, Selection might involve learning a new language by targeting those common words and phrases. When learning complex skills such as communication, Selection might involve focusing on a handful of key communication techniques or targeting areas such as active listening to achieve the bulk of your results.

Sequencing involves establishing an effective system to develop your required skills and knowledge. Designing a logical sequence means that you’re mastering key building blocks while avoiding complexity and common points of failure in the early stages of your journey when you’re least prepared to deal with them. Ferriss described learning swimming with an approach that initially focused on kicking off a wall and practising gliding and then standing up rather than swimming. He noted that “failure points like kickboards were completely avoided” and that practising breathing, although a vital building block, came much later.

Ferriss also relates the example of chess champion Josh Waitzkin as an example of Inversion applied to Sequencing. Waitzkin learnt chess by starting with the endgame, with a king and pawn against an opposing pawn, rather than the potential overwhelming complexity of openings. Waitzkin noted this sequence inversion allowed him to focus on high-level concepts and strategies rather than getting sunk in the ‘quicksand’ of memorising and staying up to date with an ever-growing library of openings. Ferriss applied a similar technique while learning the Tango, by first learning the female ‘follow’ moves that ultimately helped frame and accelerate his learning of the male ‘lead’.

Ferriss’ final step involves identifying and amplifying Stakes. Initially, he highly recommends ‘no-stakes’ practice or practice where you can make mistakes with no significant consequences — such as using a lettuce knife to learn knife skills. However, Ferriss also notes that, in relation to human behaviour, ‘logic fails’ and that no amount of great planning and sincere intentions will guarantee success. Consequently, Ferriss recommends finding ways to create meaningful stakes to ensure that you will carry out your development plans. One of his preferred techniques is to leverage Loss Aversion and the fact that losses loom larger than gains, by committing to a payment to a cause or organisation that you detest if you don’t meet your goals.

In addition to DiSSS, CaFE represents a secondary and supplemental learning framework from Ferriss that stands for Compression, Frequency and Encoding. The key elements in a little more detail are:

Ferriss’ DiSSS Learning framework has strong ties to Divide and Conquer and even Occam’s Razor to better deconstruct complex learning goals. Selection of your learning building blocks obviously relies on the Pareto Principle, but might also be analysed by using prioritisation techniques such as the Impact Effort Matrix to draw focus on encouraging ‘quick wins’ early in your process. Creatively choosing stakes that tie your ‘future self’ to your intentions will benefit from our Interrupt and Use Your Cognitive Biases Playbook.

In addition, DiSSS combines well with other learning models. Beyond the connections with Spaced Retrieval and the Feynman Technique, which have already been noted, also consider combining Ferriss’ approach with Double Loop Learning and Deliberate Practice to accelerate and better embed your learning.

It’s the old notion of how do you eat an elephant? One bite at a time. So rather than feeling overwhelmed with a learning challenge before you, break it down into small building blocks.

Not all elements are created equal and they won’t all return the results that you want. Identify the high-value elements that will return disproportionate results.

Design your journey through the high-value building blocks. Avoid complications or fail points at the beginning of your journey.

Finally, maintain your motivation and commitment to your learning plan by establishing what’s at stake for you. Consider leveraging Loss Aversion to help keep future you on track.

Explore More
DiSSS Learning is featured in these playbooks:

Ferriss’ frameworks for learning are intuitive and will resonate with many, though one of the biggest challenges will be the first step of deconstruction. Not all learning goals, especially complex skills, can be easily broken down into 'basic learning units' or building blocks. In that sense, DiSSS Learning is particularly useful when breaking down a body of knowledge and developing conceptual understanding but might be more challenging to apply with complex skill. That said, Ferriss himself has applied his approach to learning the Tango and cooking, both of which could be considered complex skills.

Want a fun example of Deconstruction as part of DISSS? Consider how you might learn the guitar in the context of this amazing revelation about the power of four chords...

Tim Ferriss originally outlined his approach to learning through his popular book The 4-hour Chef which he has made it available for free here. In it he outlines both DiSSS and CaFE models in some detail, as he applies to his experiences in the kitchen.

As noted, Tim Ferriss originally outlined his approach to learning through his popular book The 4-hour Chef which he has made it available for free here. 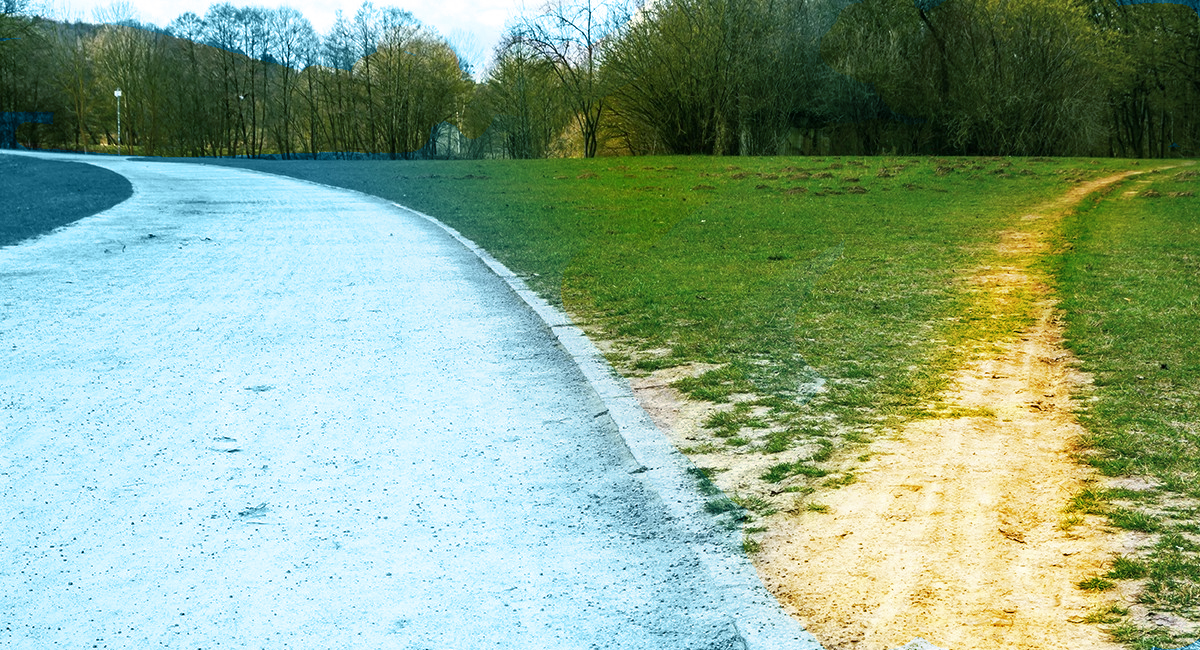