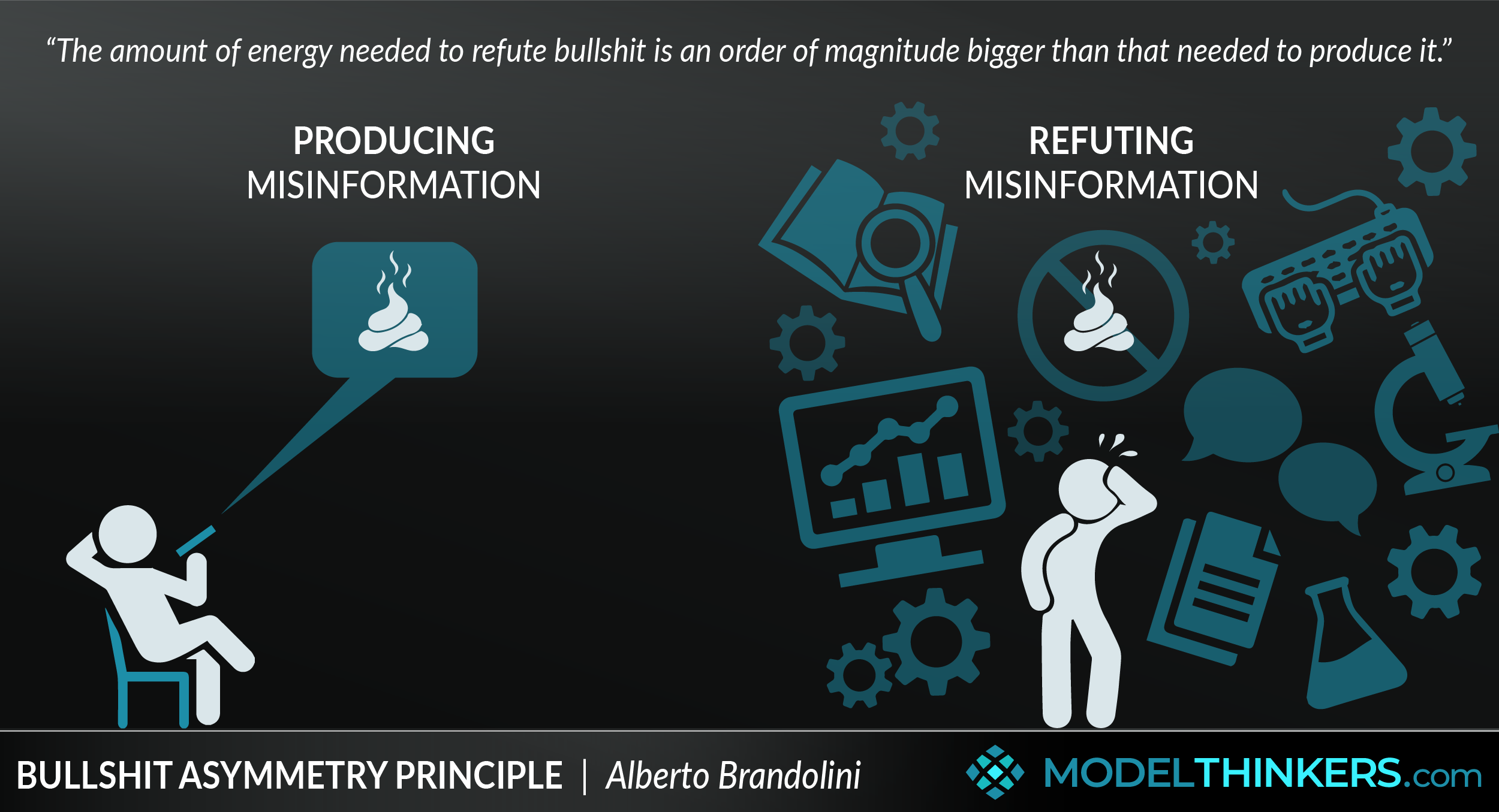 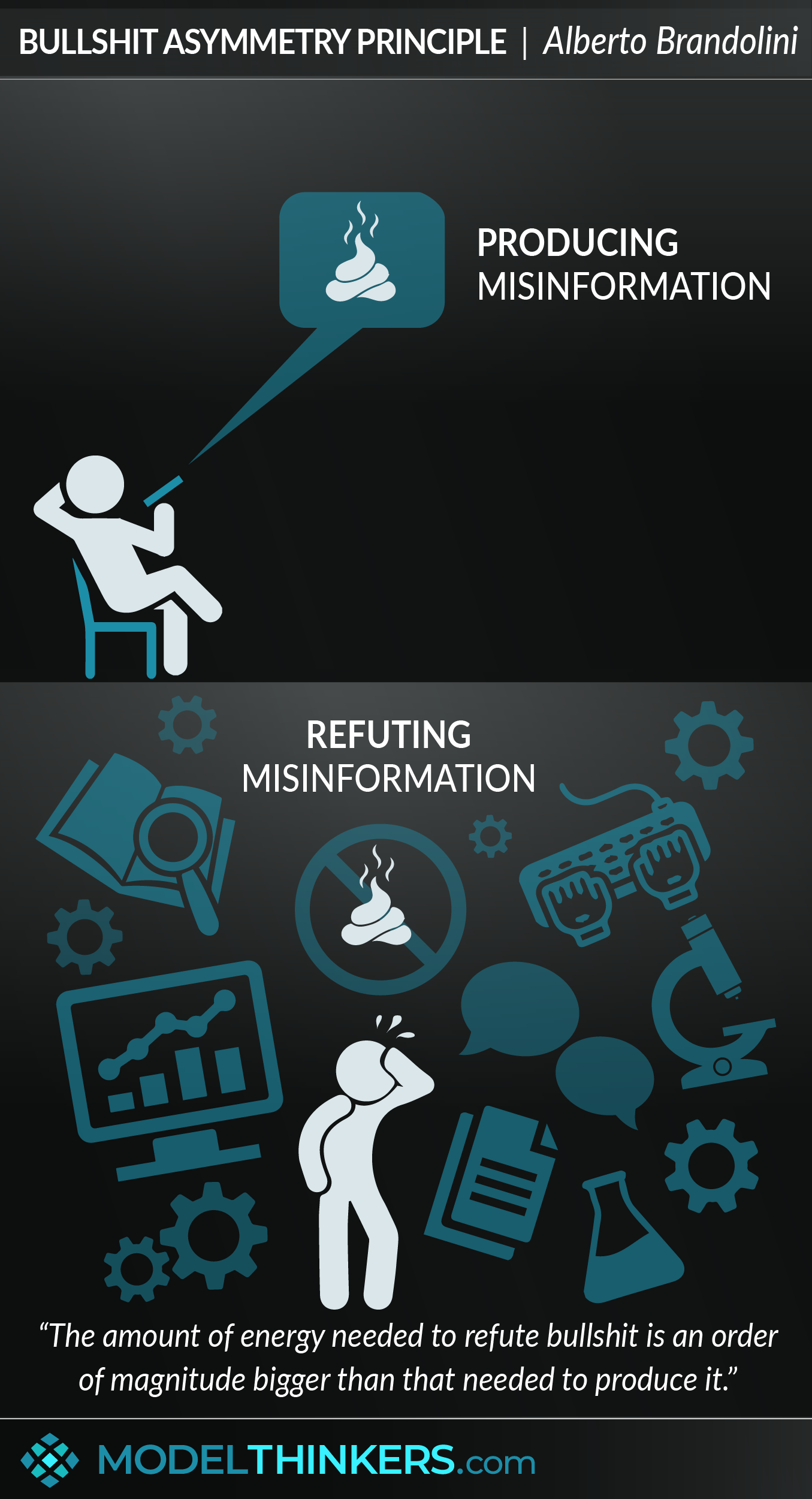 “Beware of false knowledge; it is more dangerous than ignorance.” - George Bernard Shaw.

Shaw’s warning seems more pertinent than ever, as we face growing amounts of misinformation, conspiracy theories, and unsubstantiated rumours… or bullshit for short. That’s where this concept might help.

The Bullshit Asymmetry Principle, also known as Brandolini’s Law,  states that the amount of energy needed to refute bullshit is an order of magnitude bigger than that needed to produce it.

THE POWER OF FAKE INFORMATION.

We are defining bullshit as the spreading of misinformation (incorrect information) and disinformation (intentional lies). Unfortunately, the spreading of both is nothing new. As far back as the 1700s, Satirist Jonathan Swift wrote “Falsehood flies, and truth comes limping after it.” However today, in our age of social media, the spreading of such misinformation and lies has been taken to a whole new level. Ironically, The Bullshit Asymmetry Principle was coined on Twitter, by programmer Alberto Brandolini after he was inspired by Daniel Kahneman’s Thinking Fast and Slow and reflecting on the politics of the day.

Added to these factors, is the inherent drive by many to spread misleading or unsubstantiated information. For example, such drivers are built into politics where there is a desire to rapidly ‘define the narrative of the day'. It also lies in scientific circles where academics and researchers are often under pressure to ‘publish or perish’ and focus on delivering outputs rather than ensuring that their findings are solid and able to be replicated.

IMPROVING HOW YOU COUNTER LIES AND MISINFORMATION.

There are a number of strategies that arise from understanding the Bullshit Asymmetry Principle, these include:

We’ve cited a number of heuristics that amplify the spread of misinformation, these include the Confirmation Heuristic, Social Proof, and even Framing. We’d encourage you to remain sceptical and use tools such as CRAAP and concepts such as Occam’s Razor or First Principles.

In arguing against bullshit, ensure that your asymmetric effort is worth it with an Impact vs Effort Matrix and consider using a Permission Structure to support someone to shift their beliefs. Ultimately, the idea of better understanding the truth, or at least moving closer to that truth, is best bound up in applying the Scientific Method.

Sometimes you have to go there, but be aware that unsubstantiated claims can leave you with asymmetric effort so choose your battles wisely. Remember Hitchen’s Razor which states, "what can be asserted without evidence can also be dismissed without evidence.”

Rather than being put in the position of needing to refute a claim, ask the source of misinformation to substantiate and provide evidence of their claim.

See each claim, including your own, as a hypothesis and seek to test and falsify them as you move closer to the truth. In doing so, especially when you have limited evidence, try to apply Occam’s Razor to explain something with the fewest possible assumptions.

Explore More
Bullshit Asymmetry Principle is featured in these playbooks:

Not all misinformation requires a disproportionate amount of counter-evidence, particularly when it comes to proofs in maths and data science. The Bullshit Asymmetry Principle also inherently assumes that the burden of proof rests with the person making the counterargument when, as we’ve noted, Hitchen’s Razor can apply: "what can be asserted without evidence can also be dismissed without evidence.”

In October 2022, a right-wing conspiracy theorist broke into Speaker of the US House Nancy Pelosi’s home and brutally attacked her 82-year-old husband with a hammer. In the immediate aftermath Elon Musk, freshly becoming the owner of Twitter, chose to share the following comment: 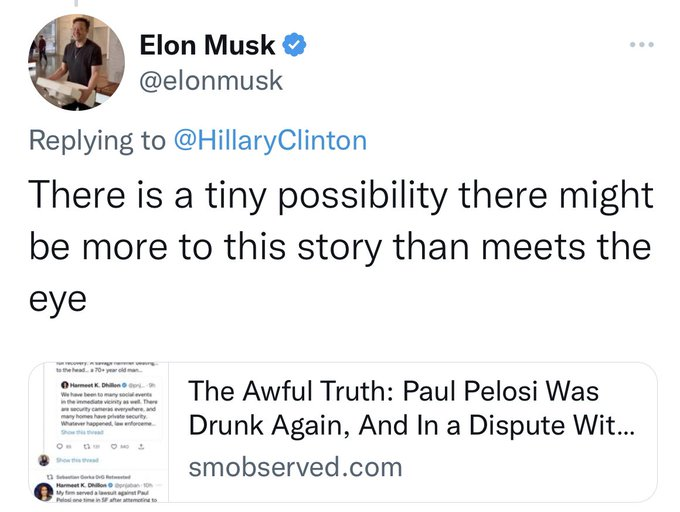 The media source Musk cited was well known as a low-credible source that had previously claimed that Hillary Clinton had died during the 2016 election campaign and had been replaced by a body double. In this case, the shared article made a baseless claim of a gay love affair between the 82-year-old and his attacker. Musk removed the tweet, but not before it received 100,000 likes. His framing of it as a ‘possibility’ exemplifies the tactic of sharing misinformation/disinformation without evidence and pushing the burden of truth back onto others. In this case, counterarguments had to include extensive reports from police and interviews with the attacker.

This recent study examined various social media sites that amplified misinformation, noting that sites like Facebook and Twitter made it simple to share ‘fake news’.  The study notes: “Studies suggest that the misinformation on social media typically gets 90% of its total engagement in less than one day, which means that for the majority of fact-checked content, the fact check will come in after the post has already received the majority of its engagement.” 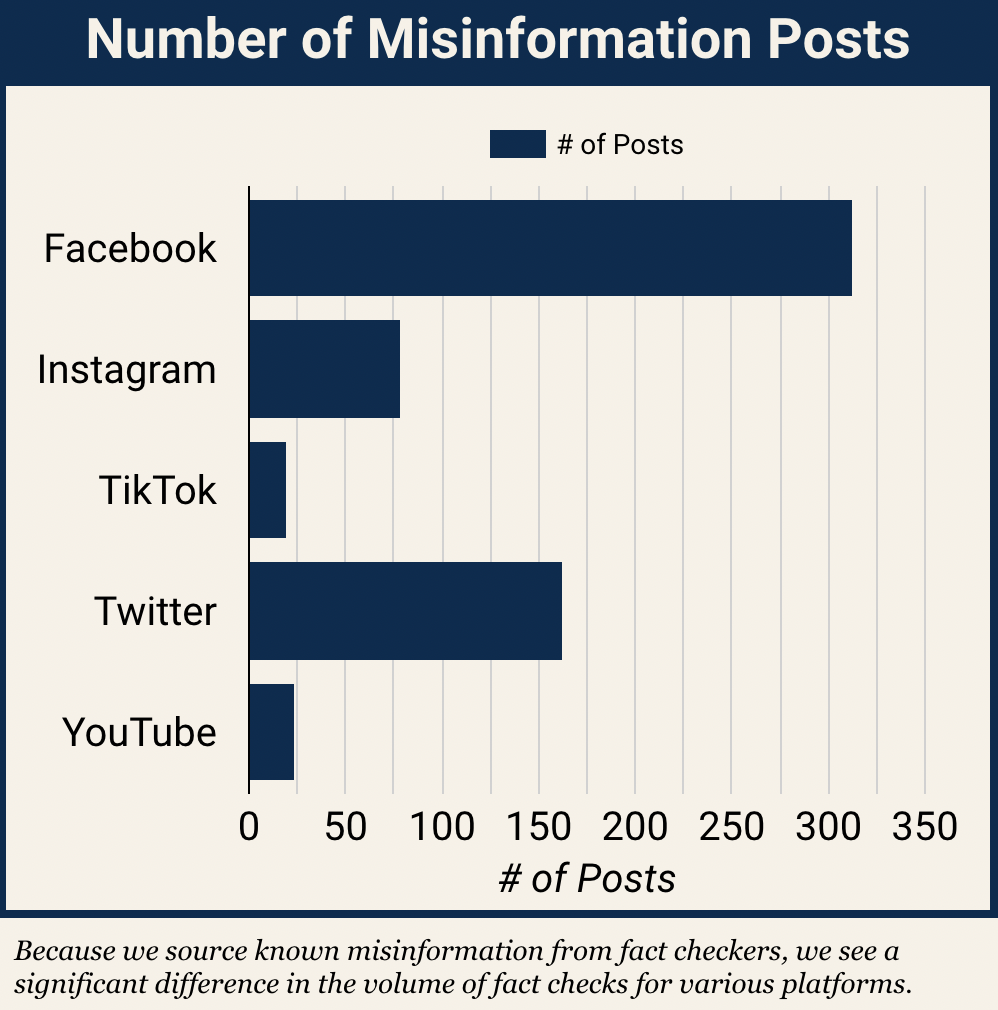 The Bullshit Asymmetry Principle was coined by Italian programmer Alberto Brandolini in 2013 in this tweet. He has since explained that he was reading Kahneman’s work on Fast and Slow Thinking, before watching an interview with then Italian Prime Minister Silvio Berlusconi. That combination led him to conceive of the principle.