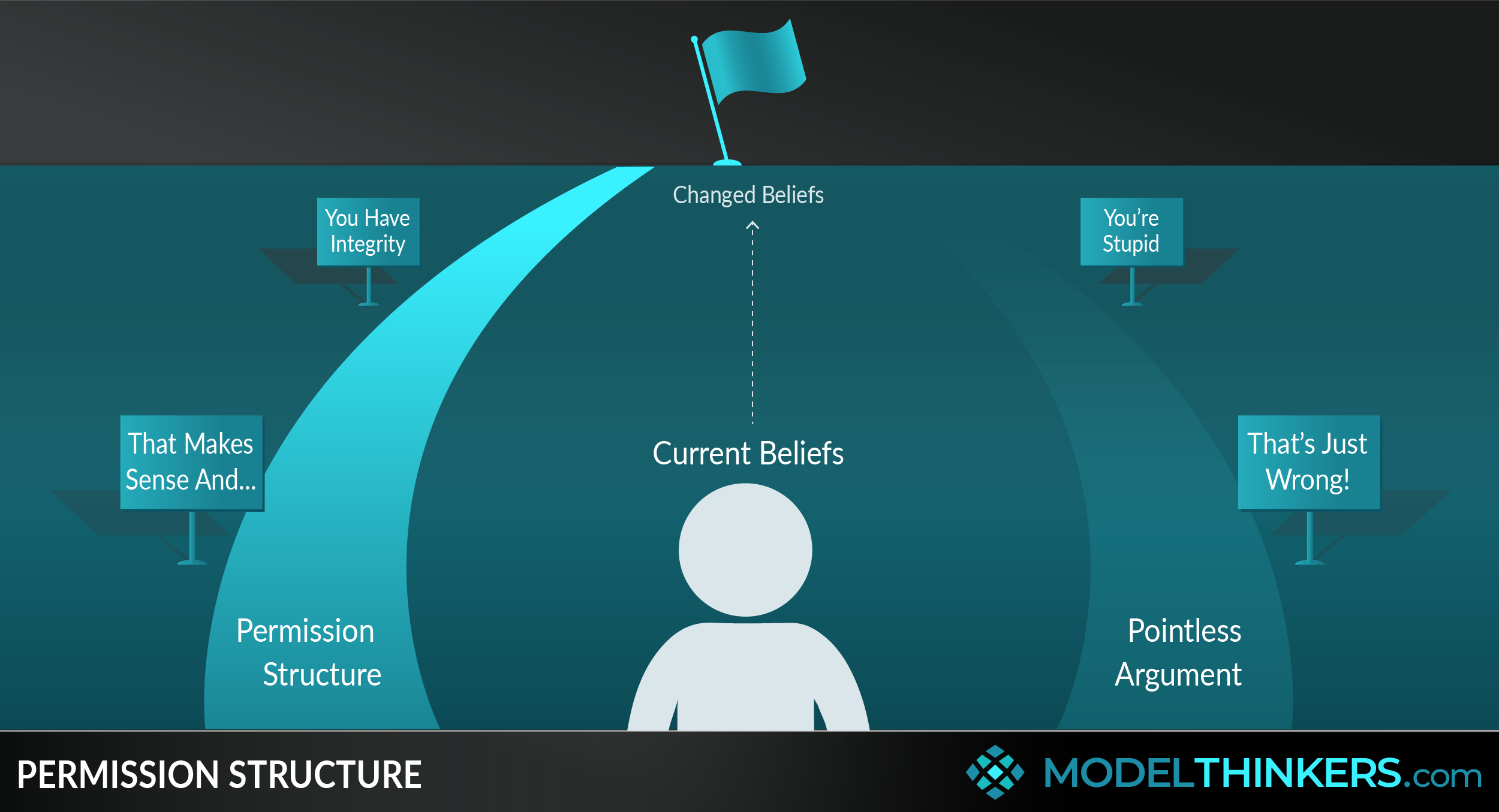 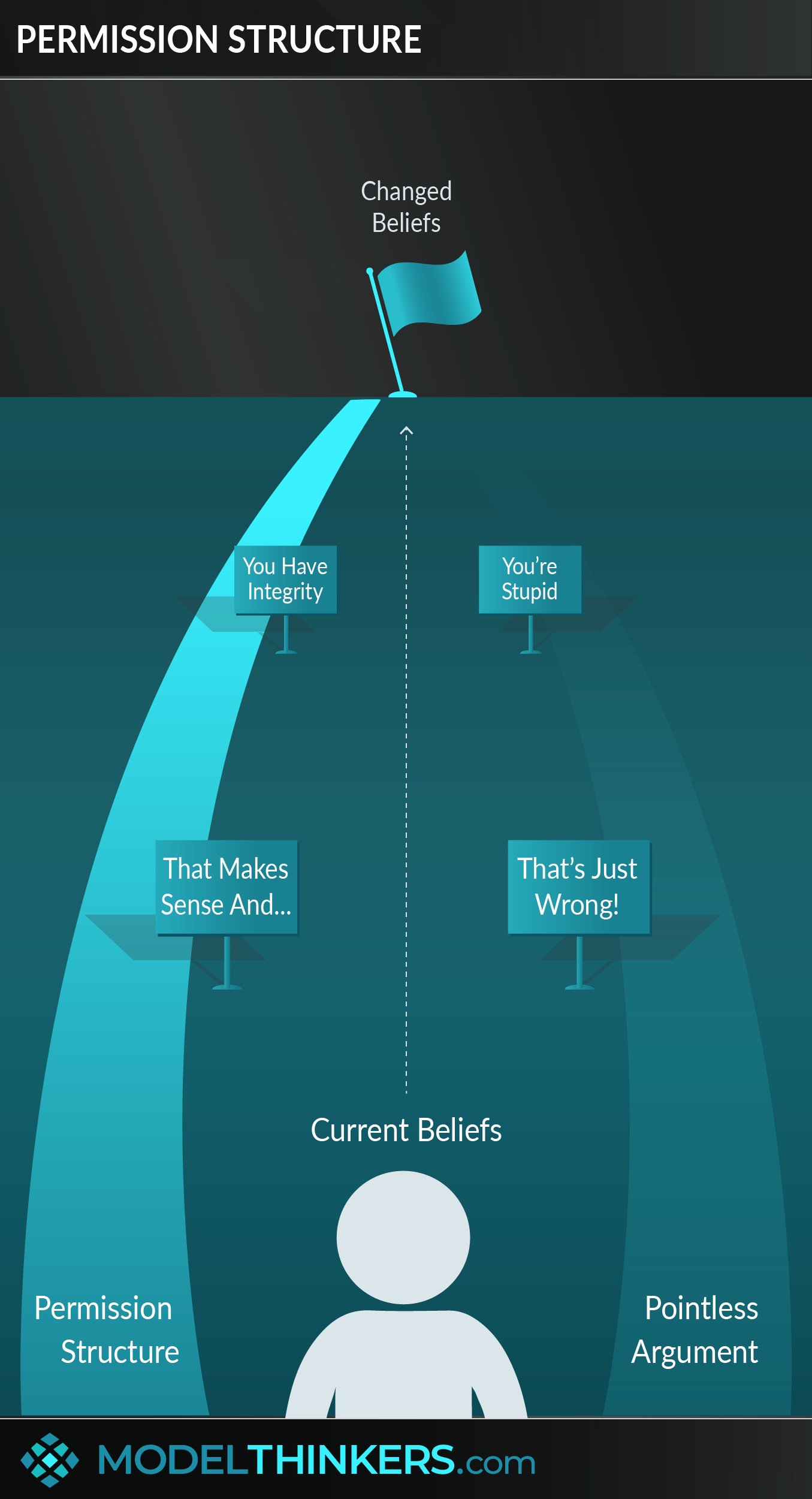 Think back to a time when you’ve tried to convince someone with an entrenched point of view to change their mind. You might have presented compelling data, conveyed rational arguments, offered supporting facts, and it was all likely a huge waste of time. That’s where this model, first popularised by the Obama administration, might help.

A Permission Structure provides an emotional and psychological justification that allows someone to change deeply held beliefs and/or behaviours while importantly retaining their pride and integrity.

Popularised by US Democratic Party operatives such as Dan Pfeiffer and David Axelrod, and eventually Obama himself (see Origins below for more), there has been surprisingly little written about this approach. In our opinion, it's based on an understanding that radically changing a deeply held belief and/or entrenched behaviour will often challenge a person’s self-identity and perhaps even leave them feeling humiliated about being wrong. It’s not rational, it’s not necessary, and it happens all the time.

Permission Structures serve as scaffolding for someone to embrace change that they might otherwise reject. An effective Permission Structure helps someone move to a new point of view in a way that feels rational, justified, and consistent with their existing core values. It’s the justification of doing something counter to their past beliefs, that still allows them to sleep at night and hold their heads up high during the day.

A Permission Structure can take many forms, here are some possibilities that we generated, including examples around hypothetically influencing someone who is anti-vax to become vaccinated against Covid.

This is by no means an exhaustive list and, of course, it will vary based on the person's specific concerns and beliefs, but the main point is to find a pathway for the person to change their opinion and/or action in a way that leaves their pride and integrity intact.

IT’S ABOUT YOU TOO!

Add this approach to your influencing toolkit, as you try to convince others to change, but consider applying it to yourself as well. This involves being honest about the challenges of the Confirmation Heuristic, and how easy it is to get locked into your views. Be aware of the Permission Structures you currently use to justify your current behaviours, and how you might use them to shift your views. Ask ‘what if’... and ‘what would it take for me to...’ questions to explore alternatives.

As mentioned, this model is strongly related to the Confirmation Heuristic and associated models such as Sunk Cost Fallacy. With many applications to politics, one could argue that effective Permission Structures will shift the Overton Window, introducing new conversations into the mainstream that might previously have been considered marginal or fringe. In relation to you, consider minimising the need for Permission Structures by shifting your views with models such as Map vs Territory and the Scientific Method.

The Social Proof and broader influencing aspects of the approach can be supported by models such as Cialdini’s Six Principles of Influence, The Trust Equation, Framing and Aristotle’s Rhetoric. Finally, in terms of better empathising with your audience, to appreciate their point of view, you might want to consider using Empathy Maps and Nonviolent Communication.

Take time to understand the person’s core values and what their current view is based on. This requires patient empathy, so consider using models such as Empathy Maps and Nonviolent Communication. The end result should include a view of the ‘non-negotiables’ and underlying needs behind the objection.

Forget about making the person wrong and being right yourself. Instead, support them to go on a journey that empowers them, maintaining their confidence and values, even as they change their position. Its about supporting someone to shift on their own terms.

Explore More
Permission Structure is featured in these playbooks:

The first challenge with this approach is that it is very rarely formally defined. Our definition is based on an analysis of the approach in practice, rather than drawing on a broad agreed upon definition. However, if you accept our definition, there are other issues. The main one being that they present simplified pathways for people to change their opinion, when such opinions will often be more complex, more deeply held, and/or multifactorial.

In other words, there is no simple rule that will allow people, including you, to quickly change their minds and jettison past views. Rather than a magical approach to change minds, this approach should be considered as one way to better influence that needs to be experimented with and explored for specific people and contexts. And a final warning, and big limitation of this approach, is that it might be experienced as disingenuous and even manipulative by the target audience.

Most of the examples of this model are in politics. David Axelrod, Obama’s Chief of Staff, was said to use prominent white endorsements of black mayoral candidates to create a Permission Structure for white voters to support his candidate.

During the 2020 campaign, the organisation Republican Voters Against Trump shared stories of loyal Republicans who made an exception with Trump, providing a Permission Structure for similar audience groups.

On the other side of the political spectrum, some argued that Trump's profiling of black speakers at the Republican conference was less about winning black voters themselves, and more about targeting conservative white voters who were concerned that he was racist, with a Permission Structure to vote Republican despite their concern.

Many would agree that Permission Structures has been implicitly baked into marketing and political campaigns for decades, but the term had minimal public usage until Obama used the term in 2013. Discussing stalled budget negotiations in a press conference, Obama expressed his belief that many Republicans wanted to ‘do the right thing’, but were worried about being challenged in the primary elections. As a result, he argued that they needed to ‘create a permissions structure’ to allow them to act.

Some attribute its original usage to David Axelrod, Democratic consultant and Chief of Staff of Obama’s White House, who was said to provide white voters with a Permission Structure to vote for black mayoral candidates through aggressive endorsement campaigns – reflecting the Social Proof approach that we outlined in the table above. Others credit the use of the term in Obama's administration to Dan Pfeiffer, former Obama Senior Advisor and communications expert. That said - we were unable to directly attribute this model to any single person.

Since Obama's time in office, the term and practice has been used by both sides of the political divide to help create justifications for people to change their minds. See the In Practice section for examples.